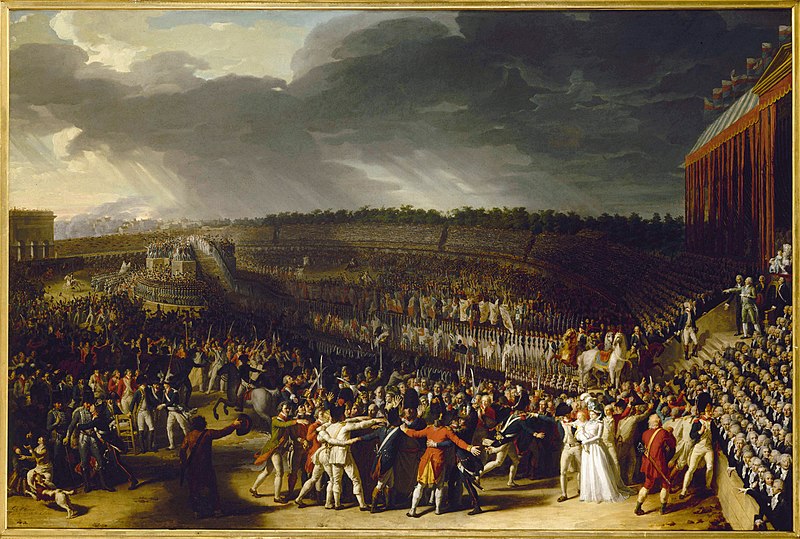 A lot of people – including French people – believe that July 14th is Bastille day, the anniversary of the Storming of the Bastille prison which happened on July 14, 1789. Is that really correct? Let’s go straight to the point. I always say that French favorite sport is complaining and that civic unrest is our second favorite but… do we really celebrate as a National day the massacre that started the French Revolution which, by the way, was a sort of civil war? Yes, in a certain way we do it but July 14th is much more than that.

July 14th may be “Bastille day” but, in fact, officially speaking, what we commemorate is the anniversary of the lesser known “Fête de la Fédération” (Festival of the Federation) which was a massive festival organized on July 14th, 1790 to celebrate the French Revolution as well as National Unity. After the riots and the violence that marked the beginning of the Revolution, the Fête de la Fédération was meant to be a symbol of unity where the King Louis XVI played an important role. It was just the quiet before the storm but many people truly believed that the worst was over and were ready to celebrate the new constitutional monarchy, the declaration of the Rights of the men and the abolition of all slaveries. The day before the festival was instituted, on July 5th 1880, Victor Hugo said: “the fall of the Bastille is the fall of all the “Bastilles” […] July 14th marks the end of all the slaveries, it is the festival of all the Nations”.

Today, July 14th is the perfect day to travel far from Paris to avoid the crowds or to find the best place to admire the fireworks at the Eiffel tower.

ps. Would you like to learn more about the Fête de la Fédération and the history of Paris during the French Revolution? Visit the Musee Carnavalet.