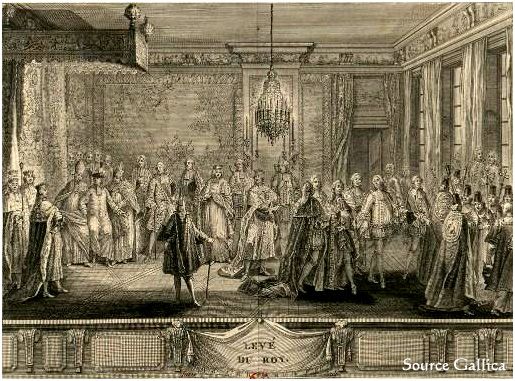 Thanks to several tv series and movies everyone knows that a very strict etiquette controlled, in ancient times, the social and private lives of the European royal and aristocratic families. Each country had its own rules that were progressively abandoned, especially in the last two centuries. Today we can still gossip – in a good way of course! – about the sometime peculiar lifestyle of the heirs of these influent European families but trust me, when it comes to strange “manners” and a crazy daily schedule, nothing can compete with Versalles at its Golden Age, under Louis XIV.

In order to control his family and the aristocracy (we will talk about it in the next post about Versailles!) the Sun King created a unique daily routine that kept everyone busy from dawn to dusk, transforming Versailles in a huge stage and the people living in there in actors, spending all their money to live up to their roles. The king, ça va sans dire, was the main character of this endless performance; the center of all the attention 24h per day, 7/7. Relatives, aristocrats and courtiers were supposed to follow his lead and accomplished to their task in the most impeccable way. The reward was simple: the king’s appreciation, which meant titles, power and money.

7.30-8.00am: Petit Lever, the “rising ceremony”, followed by ablutions and the Grand Lever. Yes, Louis XIV woke up everyday in the middle of a crowd and did all his businesses (ALL of them) in public. Being allowed in the king’s bedchamber was a huge privilege defended with life by aristocrats.

10.00am: Mass. Yes, everyday a Mass was celebrated in the Royal Chapel in Versailles and it was mandatory for the King’s entourage. The satirist Jean de la Bruyere wrote: “The people worship the King and the King worship God” and that was exactly what Louis XIV wanted.

1.00pm: Petit Couvert diner. Lunch was actually called diner and the king was served lunch in his bedroom. After lunch Louis XIV got changed for his afternoon activities.

6.00pm: “appartement evening” or, in case of emergencies, extra work session. Three times a week, between 7pm and 10pm the Sun King held his “appartement“. It was a party with entertainments and buffets, highly appreciated by his guests.

10.00pm: Grand Couvert dinner. Souper, dinner, was formal: Louis XIV ate his dinner in front of his guests… who were not supposed to eat but to watch at him enjoying his food. Of course, being invited to “dinner” was a great honour.

11.30pm: Retiring ceremony of the Coucher. Just like the “rising” ceremony but “backward” to help the Sun King getting ready for bed.

What do you think about this schedule? would you like to have more insights? just let me know!