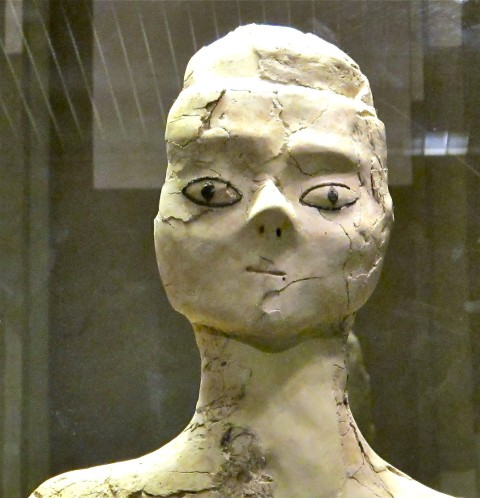 The last time I was in the Louvre one of my guests asked me to surprise him. He had already visited the museum several times so he was looking for something “new”. Well, “new” is not really an adjective you often hear in the museum, where the youngest works are about 200 years old and the display is quite fixed BUT you know what? The Louvre is alway a surprise and I have a great sense of humour so I decided to show him the oldest statue we have in there, which is not only extremely underrated but also displayed out of the beaten paths, in a usually deserted room. Practically, no one sees it and it is a shame – and it is the reason why I am writing this post.

The statue I am talking about is a Neolithic lime plaster and reed statue dated between the mid-7th millennium BC and the mid-8th millennium BC. It was discovered along with other similar statues in ‘Ain Ghazal (Jordan) in 1985 and it is among the earliest representation of the human form. While the body is quite stylized and disproportioned (quite tall but extremely flat, about 10 cm in thickness) a great effort was put into modelling the face, with wide-open eyes and bitumen-outlined irises. The elongated head also suggests the presence of a some sort of wig that added more details. The technique used to create it was simple but ingenious: the maker created a reed skeleton and then modelled the moist plaster around it. Since the reed decayed over the millennia, leaving a plaster shell with a hollow interior, to preserve the statue it was necessary to replace the core with a new invisible skeleton. This task was extremely delicate and the restoration work took a lot of time.

What does this statue represent? A human, a God, an ancestor? Why someone made it? What was its purpose? Unfortunately all these questions are un-answered. It is held that this statue, like the others discovered in the same area, represented the ancestor of the people living in the village and it seems possible that it was made to be displayed for a limited time only and then intentionally buried. It was maybe related to the cult of the ancestors who were sometimes buried in the middle of the house but this is just a hypothesis. Archeological excavations in the Levant area are still going on with the hope to find more evidences that will help us to understand the meaning of these works.

There is a question I can actually address… why is it in the Louvre? To be clear: No, it was not stolen – we are not in the Napoleonic era anymore! The statue does not belong to the Louvre but to the Jordan Museum in Amman. It is a special loan that you should admire as soon as possible!